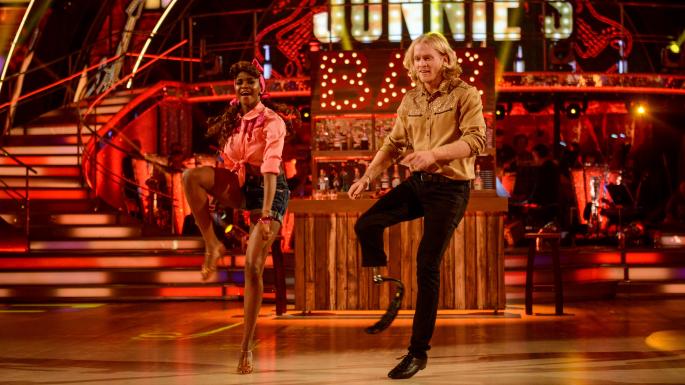 Jonnie Peacock has won two Paralympic 100m gold medals and two world championships golds, but none of these achievements has been as stressful as performing on Strictly Come Dancing. “Just before the music starts my heart is going at a thousand beats a minute,” he says.

Is he more nervous than he was at London 2012? “Yeah! For a race you’ve got years to prepare, whereas this is like saying, ‘Right, we’ve got a Paralympic games, but you’ve never run before and you have two weeks to prepare for it.”

Before Strictly, Peacock, 24, the first contestant with a disability to appear on the show, restricted his dancing to occasional sallies after several drinks when he was pretty sure that no one would remember how he looked.

His right leg was amputated below the knee when he had meningitis as a five-year-old. His reluctance to dance at parties, however, was a lack of confidence rather than an inability to move freely. “It’s just more about being self-conscious and thinking, ‘I’m probably going to make a fool of myself.’ That’s quite an obstacle to overcome.”

He has acquitted himself well so far. He and his professional partner, Oti Mabuse, were seventh out of fourteen pairs last week, which should be good for his confidence before tonight’s fourth outing. As well as last Saturday’s more than passable paso doble, he has successfully negotiated the waltz and switched from his “day leg”, which fits a shoe, to a specially made version of his running blade, to give him enough bounce to jive. The BBC has kept a camera fixed on his joyfully weepy mother, Linda. Peacock, who has three sisters, says that his illness and the amputation were tougher for his family than his five-year-old self. “Pretty much everyone around you probably deals with it more intensely than you do. When you’re five you don’t really know what’s happening. I woke up and I didn’t really understand. I can see that my leg is gone and that’s upsetting. But my mum, my dad, everyone around me saw how close it was to me not being there at all.”

As he grew up he developed a love of sport and a drive to compete. “People with a disability can either go one way or the other. Some people have a tendency to dwell on it and see the negativity, and it can be quite hard to overcome. Other people go, ‘No, I’m not going to take that. I’m going to try and push past it. What can I do? What can I achieve? I’m not going to just think about walking, I’m going to think about running.’ It’s all [about] overcoming.”

Sometimes his prosthetic leg caused painful sores when he walked home from school. “But it never meant that I’d stop going to school. I’d be in an incredible amount of pain, but you just push past that. I’d still want to play football. I wasn’t going to sit there and say, ‘Oh, my leg’s sore, I want to play football but I can’t.’ That never crossed my mind.”

Peacock’s parents split before his meningitis scare. He lived with his mother until he was 11, then spent five years with his father before moving in with his mother again. He is close to both parents, who have supported his athletics career.

When he was 15 his mother took him to a British Paralympic Association scouting day, during which he tried various sports. He settled on sprinting — and things moved quickly. He was 19 when he won gold in London, taking Oscar Pistorius’s crown and bursting into the national consciousness.

“People ask, ‘What is the legacy of London 2012?’ If you can take one thing from it, the way that it changed people’s perceptions of disability alone is worth all the money they spent on it. It made people turn from feeling sorry for someone with disability to look at someone with a blade, or someone in a race chair, and think, ‘Actually, that’s really cool.’ ”

Peacock, whose easy-going manner belies his fierce competitiveness, is taking a break from athletics and does not expect to race in 2018. “I want a year where I just don’t think about sport too much. I don’t have to train six days a week, I can see my family, I can get drunk . . . maybe not have too many burgers because I don’t want to come back in 2019 and then suddenly be a shot putter instead of a sprinter. But I want to enjoy myself a bit more next year and to mentally refresh.”

Outside athletics, he enjoys walking his two French bulldogs and going for the odd meal with his girlfriend, the Paralympic 400m runner Sally Brown.

He has the 2020 Paralympics in Tokyo in his sights. Victory in the 100m T44 class (for those with amputations below one knee) would be a Usain Bolt-type hat-trick of 100m golds.

When Peacock dances on Strictly the untutored viewer can’t tell he has only one leg. The faults the judges have spotted mostly relate to his upper body movement and his minimal ability to inhabit the character he is playing. “Nice butt,” said Bruno Tonioli, before instructing him to keep it tucked in.

He doesn’t find learning all the complicated moves easy but he’d like to keep going for a few more weeks. “If I can come out with the ability to at least dance half-decent for my wedding day maybe, then that’s a massive bonus.”

So is there a wedding coming up? “No, no, no. Not yet! I’m just saying for the future.”