Paralympic sprinter Jonnie Peacock recently appeared as a guest on Channel 4’s The Last Leg, a late-night comedy chat show which aims to challenge the representation of disability on television. Adam Hills, the host, raised the question of whether it is fair to judge Peacock on the same criteria as the rest of the contestants on Strictly Come Dancing.

Hills asked Peacock #isitokay? that in week three of the competition, he was criticised for sticking his bottom out when such a posture is a common result of wearing a prosthetic leg? Peacock agreed that it was difficult for him to dance in the desired posture and suggested that his incorrect posture was potentially due to the way he has to distribute his weight when using his prosthetic leg.

Although Peacock downplays any sense of being at a disadvantage, Hills raised an important issue. If reality shows want to increase the visibility of disabilities to their audience, there are some factors they must consider. It is worth discussing whether disabled competitors should be judged on the same criteria as their able-bodied competitors. The type of disability and/or prosthetic could also be taken into consideration when scoring these contestants. And perhaps most importantly, does marking disabled and able-bodied competitors on the same criteria lead to equality or exclusion?

While Jonnie Peacock is the first paralympian to appear on Strictly Come Dancing, he is not the first disabled person to compete on a reality talent dancing show. In 2015, the US version of the show, Dancing with the Stars featured an Iraq War veteran amputee, Sergeant Noah Galloway. And in the same year, Royal Marine veteran Lance Corporal Cassidy Little – who lost his leg in Afghanistan – appeared on The People’s Strictly .

Galloway and Cassidy were both presented as “wounded heroes” – highlighting their veteran identities. In many instances their prosthetics were deliberately foregrounded in the routines and their video introductions each week focused on the practical and emotional difficulties of training for each dance. Most importantly, the judges’ comments acknowledged the difficulties they faced in performing the dances and took this into account when scoring.

In contrast, although Peacock has talked about his disability, he has generally downplayed any sense that it should hinder his performance. The only dance so far in which Peacock’s prosthetic has been visible is the jive, after which he was hailed as a “hero”“ by the media. In his Huffpost blog , Peacock wrote:

"I love reading that my prosthetic has got households across the UK talking about disability. I’m on this programme to show everyone that there is ability in disability and that if you put your mind to it, and work hard, then anything is possible." 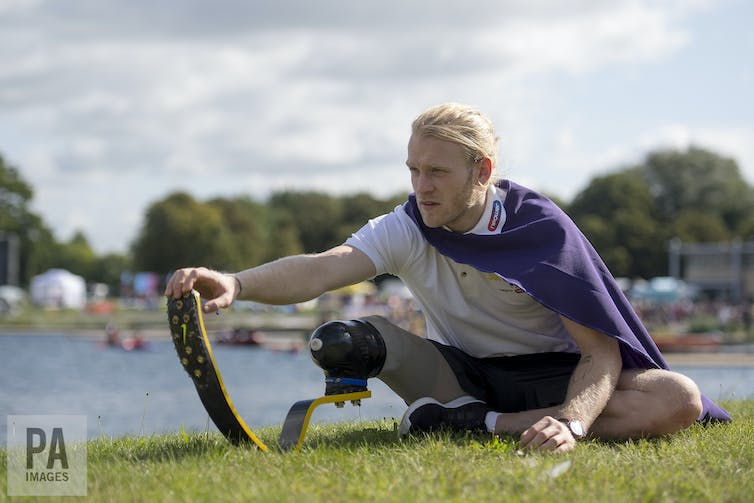 Peacock’s ability to compensate for his disability has meant that the narrative set up by Strictly rarely refers to his disability and the judges don’t appear to take it into account in their scoring of his performances. After he was voted out of the competition, Peacock thanked the judges for treating him the same as everybody else.

But having repeatedly drawn attention to an issue caused by his disability without acknowledging the reasons, can the judges really claim to have treated Peacock equally?

Ignoring Peacock’s disability potentially put him at a disadvantage in relation to his fellow competitors. This made it less likely that he would fulfil his hopes of demonstrating that, if we work hard enough, "anything is possible”.

Peacock’s inability to achieve the correct posture is a result of his disability – so, surely awarding him lower scores on this basis inevitably resulted in him being unable to progress beyond a certain point in the competition. His performance on Saturday night was given a standing ovation by the audience in Blackpool’s Tower Ballroom. But the judges’ comments repeatedly focused on Peacock’s incorrect posture and he found himself voted off the programme.

Peacock hopes that his appearance has paved the way for more contestants with disabilities to come forward and take part. But if this is to be the case, the programme will need to consider how this will work. As sporting organisations and academics begin to scrutinise the categorisation systems used in the Paralympics, perhaps it’s time for reality talent shows to consider how people with disabilities should be represented in order to ensure fairness and inclusivity.