"An excuse" - that's at least how Jonnie Peacock would describe his transition into elite level sport.

But engineering's loss was British athletics gain as since focusing solely on his sport Peacock has gone on to win Paralympic gold in the 100m at both London and Rio Paralympic Games and break a number of records on his way to doing it.

"I am probably the least organised person in the world," Peacock told the latest series of My Icon for National Inclusion Week.

"I really wanted to do car mechanics at college but I applied late and all the spaces were filled up so I ended up doing engineering.

"I did that for about two or three months but that time was also when my sport was starting to take over and I was getting invited to my first internationals and things were just starting to ramp up so I think I just used that as an out.

"I said 'oh I think I need to leave college so I can go and train full time, really focus on sprinting' and luckily my parents bought it. I think it was the right decision in the end." 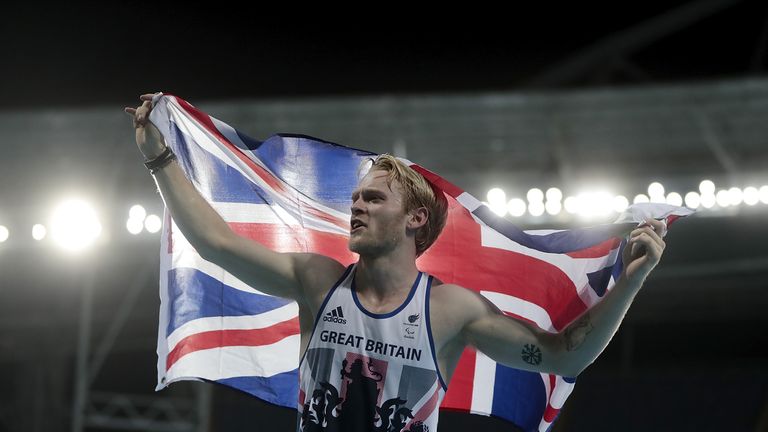 It's not just athletics where the superstar sprinter has excelled. After the World Championships in London last year he took some time away and during that time caused a stir on Strictly.

He made it all the way to the Mecca of Ballroom, Blackpool, before bowing out and impressing not only the viewers but also King of Ballroom, Anton Du Beke too with his skills on the dance floor.

That was despite Peacock being a reluctant dancer, who will admit he usually has to be "at the point where I know I'm not going to remember it the next day" before he will strut his stuff at any party.

"I think it was my first ballroom dance and Anton told Oti (Mabuse) and said you've done a fantastic job, I was looking at him and I couldn't tell which leg was the false leg, " Peacock said. "And when Anton is saying that you know you've done something right."

Not many people can say their first international medal was gold at one of the biggest sporting events in the world, but Peacock can.

Part of the group of athletes that came through in 2010 he burst onto the scene, winning gold in the T44 100m in his Paralympic debut at a home Games in 2012.

His secret to that success he says is focus and three cues he thinks about in the race to help him do that - however, it does not always go to plan.

"It was London 2012 and the first time I went into the blocks," he said. "I don't know where my head was I was thinking about all sorts of different things like what food I had the fridge when I got home for example.

"The starter called set and I just remember thinking I wasn't ready."

Luckily for him though another runner had lost their focus too and the starter had to ask the race to be set again.

Moving onto Rio where he claimed his second Paralympic gold, which Peacock describes as a "strange one" because of the amount of worry there was beforehand with the Zika virus and whether there would be enough money to even hold the Games, his focus was elsewhere.

"To be honest I was out of there the second I could be," Peacock said. "The day after my competition I had flown home and was watching everyone else compete on the television.

"We had London 2017 World Championships around the corner and for me that almost meant more because it was back in that London Stadium, it was back here.

"In fact, I almost wanted to get Rio out of the way so I could get back to London."

When the World Championships did land in the capital it was once again a golden meet for Peacock and saw him set a new European record of 10.64 in the heats on his way to reclaiming the 100m title he had last won in 2013, after missing the 2015 Championships due to injury.

Peacock will say he came into athletics at a good time, when perception of Paralympic sport was changing, describing London 2012 a 'big game changer.'

"It made people realise how good sport is in the Paralympics not disabled sport, it was just sport.

"I remember a spectator watching Dave Weir go round the track and barging people out of the way, those guys were really taking it seriously.

"There were some incredible tactics in those races, there were races that were won by millimetres on the line and we were all lucky enough to be a part of that in 2012."

Moving forward though he believes there is another step athletics, in particular, can take, to ensure the legacy that was started in Stratford continues, and would like to see the Diamond League including para-sport on a more regular basis.

"They're starting to take steps but it's just kind of a bit intermittent at the moment and they need to be backing it properly," he said.

"For me all of the Diamond Leagues need to really treat Paralympic sport as an additive and not look at it as something that is 'oh maybe we should be putting it in here cause we're good guys'.

"Like no, realise that para-sport does sell tickets, we sold 50,000 seats in the London Stadium. There's still people that turn up to these events and these people want to watch us.

"I think it will bring something different to Diamond League and that for me is a step forward, making sure that Paralympic and Olympic athletics is really starting to join together and to create something a bit different."

Don't miss Jonnie Peacock on the latest series of My Icon on Thursday - All My Icon episodes are also available On Demand.