The saying goes that absence makes the heart grow fonder and that is certainly the case for Jonnie Peacock, who has regained a real hunger for athletics following a break from the sport.

Since storming to Paralympic success as a 19-year-old in 2012, the sprint star has remained in the spotlight thanks to his further global gold medal-winning achievements as well as a stint on television dance contest Strictly Come Dancing but, at the end of 2017, he decided it was time to refocus.

His year out did the trick and now the two-time world champion says his enjoyment is “back with a bang” ahead of a big couple of seasons featuring the World Para Athletics Championships in Dubai and the Paralympic Games in Tokyo.

“Taking that mental break was a big thing,” says the 26-year-old, who retained his Paralympic T44 100m title in Rio. “That real desire is back – the hunger, I guess, and I can’t see it going any time soon.”

It’s similar, he adds, to the feeling he had when just starting out in the sport in 2012.

“I guess the difference now is I know a little bit more about what I can achieve and I am super excited to train at the moment,” he says. “It’s my love, it’s my passion. I feel like I’ve rediscovered that, it’s been relit. Every night I’m sitting there excited to see what I’ve got the next day.

“I’m just enjoying it all again. I’m really looking forward to going to train, for the next speed session, the opportunity to race. I’ve always had that to a point but it’s really back with a bang this year.”

“That real desire is back – the hunger, I guess, and I can’t see it going any time soon”

In 2012, under the guidance of American coach Dan Pfaff, the single-leg amputee sprinter improved his 100m PB from 11.47 to 10.85. In 2017 he went even quicker, clocking 10.64, and Peacock is excited to see what the next couple of summers hold as the Loughborough-based athlete, who is also guided by Michael Khmel, is back on the same training programme that they used seven years ago.

“This is something I know works so hopefully we’ll pick up where we left off,” says Peacock. “I’m still really dying for that massive race where it all goes down. I don’t feel like it’s happened yet. I feel like there’s going to be a race at some point where we’re going to see a good six or seven guys run sub-11 and it’s going to be close.”

On his major medal ambitions, he adds: “I’ve got confidence in my team that whenever it comes to a major championships we’re always in good shape, so we’ll just have to pray that the same thing happens again.

“It’s not ideal for Dubai being insanely late,” he continues, with this year’s World Para Athletics Championships taking place from November 7-15. “It’s hysterical when you’re around Loughborough and you hear all the able-bodied guys going ‘our Worlds are so late this year’ and you just look at them like ‘really?!’

“Ours are in November, so it doesn’t help us because then we take a break and before you know it, it’s December and there’s seven/eight months to the Paralympics. But obviously it’s a world championships, it’s a major title and that’s something that we want to go out there and we want to defend.

“It’s also an opportunity to go and run fast. Dubai will be a good track, it will be perfect conditions.”

Before that comes a return to the London Stadium, scene of Peacock’s Paralympic success in 2012 and world gold in 2017. 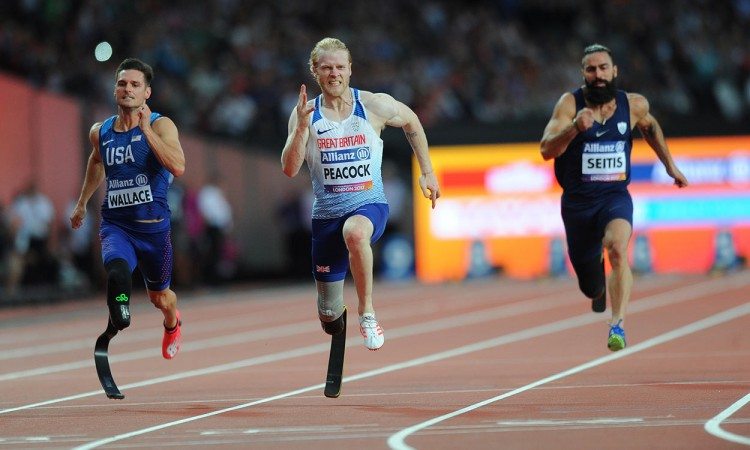 However, his record at the Müller Anniversary Games doesn’t quite match his major championships achievements in the same stadium – a fact he hopes to change this weekend.

“It’s great (going back to the London Stadium for the Anniversary Games) but the only issue is I’ve never actually won there if it’s not been a championships! I’ve lost every other race!” he laughs.